I was once a bus conductor, barber and okada rider, says Lawrence Okwa

Mr Lawrence Okwa works with the Minister of Labour but his experiences in life have been humbling. He has been a barber, bus conductor, and bouncer at a Makurdi night club. Nonetheless, these supposedly lowly vocations were the ladder upon which 'Doctor Seb' (as his friends call him) climbed to get where he is. And he is going to climb further, he says in this interview for Akweya.com. 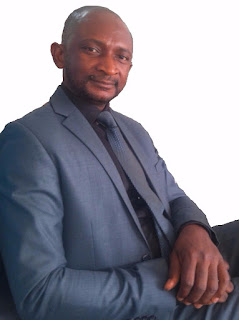 May we meet you? Who is Lawrence Okwa?

My names are Lawrence Anogvi Okwa. I was born 46 years ago to the family of Mr and Mrs Candidus Erukpe Okwa of Adim Akpa in Otukpo LGA of Benue State.

I had my primary and secondary education at LGED Primary School, Akpa Community Secondary School and School of Basic Studies, Makurdi, between 1978 to 1990.

I joined the Department of State Services (DSS) as a detective and later trainer and served as body guard to several VIPs between 1995 to 2008 before I voluntarily resigned from the Service to pursue other challenges in life.

It's important to mention that before I joined the DSS, I worked as a motor conductor, Okada rider, a barber as well as night club experience.

What was it like when you worked as a conductor, Okada rider, a barber and in the night club? Were you a bouncer at the club?

I have always believed in financial independence and that has been my motivation. I therefore embrace any legitimate means of making money to keep life good. Doing the work of a bus conductor, Okada rider and a barber was rewarding and interesting because it gave me money and made life easier. At Carnival Nite Club Makurdi, I
worked as the assistant bouncer briefly before I moved on to barbing.

You later took a course at the International Institute of Journalism. Why did you take the course?

I did a short course at the International Institute of Journalism Abuja between 2010 and 2012. I took the course basically to improve on my talent and the passion I have for writing. I actually derive joy in writing and felt I should acquire a little knowledge in that field.

You're the brain behind the Facebook and WhatsApp groups known as Akweya Patriots. Before your groups, there were others, so what are the missions of these new ones?

The Akweya Patriots of both Facebook and WhatsApp were created to achieve the same objective of promoting and propagating Akweya social, cultural, political and economic values. The major difference between this group and the others is that it is expected that views expressed here should be patriotically aimed at benefiting the Akweya people and not frivolous and for mere entertainment.

The level of development is not commensurate to the contribution of the Akweya people.

As an activist on social media and in your human social networks, do you think Akweya have played their political games smart enough?

In my opinion as an Akweya person who spent most of my life in the village, I think that we have rather been short changed and relegated to the background as a people. The level of development is not commensurate to the contribution of the Akweya people. If rural electrification is the only visible presence of government in the land, then we've not been smart about it.

But other people would argue that aside from rural electrification, there is the Otobi dam and there is the university at Akwete. Wouldn't you say Akweya got a lot, especially during the Jonathan administration?

I must commend the efforts made to bring electricity to the doorstep of the rural communities of Akweya after a very long time of civil rule in Nigeria. As for the dam and the university, I believe there was more to it than we can see. I think that the dam was not a need-based project, while the university would have been a laudable project but for the time it came. I had my suspicions that it was a means to empower some interests to prosecute elections.

Still on the dam, I may not be an expert on this area, but what is the importance of this project to the people of Akweya in the first place? Again, I think some serious consequences were ignored in the course of environmental assessment, if and when the dam is eventually completed. What if the dam overruns its banks with our history of flooding already a challenge that has almost overwhelmed us?

It was alleged that the valid owners of the land did not benefit from the compensation that was meant for them. Rather, indigent members of the community were compelled to sign for huge amounts but given peanuts. Can we therefore say that the dam was a blessing or another way of taking undue advantage us?

Like I said earlier, Akweya need basic amenities such as functional primary health centres, construction and renovation of primary schools and provision of portable water, which I doubt we have in our place. That brings to bear the pathetic state we find ourselves in, as a people, considering our political affiliation in the last sixteen years of being in the mainstream of the current democratic dispensation. I think we were not only shortchanged but taken for granted. I think we deserved better than what we got even during the administration of GEJ.

In politics, could you advice Akweya on the way forward?

The Akweya people must be ready to get involved in the political process for the overall benefits of the generality of the community. A situation where a few individuals are allowed to mortgage the interest of the whole is unfortunate and unacceptable. We must speak out against selfish and parochial politics where the development of our people and community is not considered. The least we desire and deserve is the basics of life and not unfulfilled promises and intentions. Evil thrives when good people remain silent.

I think that the dam was not a need-based project, while the university would have been a laudable project but for the time it came. I had my suspicions that it was a means to empower some interests to prosecute elections.

When you say Akweya must be ready to get involved in the political process, one of the issues is that the process is expensive, and we have heard a big representative of our zone saying Akweya cannot get anything substantial because we do not contribute financially during electioneering or in building party structures. How would you react to this?

It is unfortunate that the political process is hijacked by the money bag politicians in our country at large and zone in particular. This development was largely made possible by the level of extreme poverty prevailing in Akweya.

It is however possible to overcome this challenge if only we could avoid sentiments and engage the money bags and the so called powerful representatives with one voice. With estimated voting strength of about ten thousand registered voters, I think its enough to bargain politically what is due to us. If we resolve to say no to the peanuts offered us for a block vote.

We do not stand to lose anything considering our already backward position politically. If we get united, resolve to give our votes in exchange for a tangible and life touching projects for our people instead a ridiculous bags of rice, we may be taken seriously for once.

Finally, do you intend to stand for elective office someday?

I do not believe one needs to be involved in partisan politics before you impact on your community. My concern over the years is to be financially empowered to enable me contribute meaningfully to the development of my father land.

However, if it becomes necessary for me to participate in elective politics to achieve dreams for Akweya people, I will consult with stakeholders for guidance. I'm an advocate of communal engagement towards achieving set goals.